In the KNX/EIB system, does one have a large selection of consoles serving to control the lighting, heating, window blinds, etc.?

Universal KNX/EIB control consoles are first of all multi-functional and aesthetic, they do not take up much space on the wall and offer great capabilities, i. e. control the lamps, radiators, blinds, etc. The range covers many models available in a variety of colours, shapes, and manufactured of different materials (plastic, glass, steel). In general the consoles may be divided into:
• simple consoles, made up of a few buttons, and providing a space to describe the function of each button,
• consoles with built-in thermostat and display; the display can i. e. show the current temperature in the room, or the date and time,
• LCD and touch-sensitive panels, having, apart from basic functions, also many additional ones, like the ability to create light scenes,
• wireless consoles (with rich functionality), available as remote control units working as consoles, controlling audio/video equipment. These are also capable of programming light scenes and macro commands.

Which consoles should I choose to be able to control the system well?

First of all, one needs to determine, which functions should be implemented in them. Typical functions are (in brackets the number of buttons taken up by a specific function):
• switching of a lamp or outlet (1)
• switching of a lamp + light intensity adjustment (2)
• control of a window blind (curtain rail), or a group of these (2)
• opening/closing of a gate, door, roof window (1)
• selection of a scene (1)
• OFF function - to turn off all lamps, i. e. when exiting the room or before a scene is selected (1)
• other special functions, i. e. when exiting the house (1)

One needs to add the number of buttons required to execute all functions planned for a room, and choose an appropriately sized console (or several smaller ones). When executing the calculations do not forget the lamps outside the house that have to be controlled from the living room (and optionally a radio wave remote unit for use in the garden).

What obstacles might a customer/designer encounter if they use the KNX/EIB system?

Absolutely none! Specifically speaking, not greater than in case of traditional installations. The design and installation of the system is handled by professionals able to advise the customer should they need information or need to select a solution. The KNX system had not been thought up by some unknown 'garage-based company', but is the result of cooperation of a hundred leading European companies (like ABB, BERKER, BOSCH, GIRA, HAGER, JUNG, MERTEN, MOELLER, SIEMENS). The solutions based on an official (European Union norm) standard for electric installations. This system is driving typical electric installations off the market and will soon be commonplace. A house equipped with a smart system offers more comfort, security and savings, and has a bigger value for any future buyer. 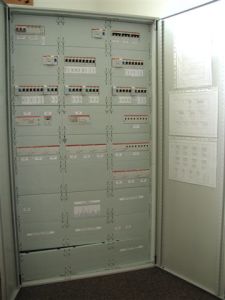 The smart home system was designed to provide maximum ease of use and comfort for users. This entails the usage of a large number of devices - i. e. control of lamps and window blinds. Hence the higher number of cabling connected to the switch cabinet. In order to be able to easily execute, maintain and expand the system, all cables are labelled. They are run to the cabling and connect to special terminals. The switch cabinet also has about 30% of overhead space reserved for future modifications and enhancements. The switch cabinet is not deep, however (approx. 25 cm, 10 inches), does not get warm, and - most importantly - it can easily be hidden through installation in the wall or in the wardrobe (i. e. behind clothing).

Can the KNX/EIB system control a HVAC system? If so, then how?

Every building is divided into multiple 'climate' zones, in each zone one can set a different temperature (through heating/air conditioning). The system also cares for proper air humidity and freshness (ventilation). In case of use of a HVAC system through air channels (with throttles above every room), depending on the need), air having the required parameters according to the need, is pumped into the system, with a force depending on the number of rooms that need it. The opening of a window causes air uptake from the HVAC system to be blocked, which serves to conserve heating energy. If no rooms require heating or cooling, ventilation is engaged, and if the humidity sensor detects that the air is overly dry - the air is additionally humidified. Thermostats are integrated with the light control consoles. Each thermostat allows the readout of temperature in a particular room and setting different desired temperature. Thermostats in rooms are independent control units sending signals on the need of heating or cooling.

Which technical systems does a smart building have?

A modern smart building has a multitude of very complicated technical installations. Those are, among others: electrics, lighting, heating, ventilation and air conditioning, access control, burglar protection, fire protection, CCTV surveillance, and others. They can, of course, function independently from each other, however it is precisely the integration of their work that allows full use of the qualities of a building for the purpose of comfort, security and economy of use.

What does BMS stand fore?

BMS is short for Building Management System. It is a central management system for large buildings, optimising the usage of available media. It allows, apart from full control of the automatic air-conditioning and ventilation systems, also control of the lighting and electric energy network. BMS systems have to be characterised by outstanding flexibility (configuration changes as needs change), and scalability (expansion of small systems into larger-scale ones, covering multiple sites). Such requirements are fulfilled by modular design allowing full utilisation of capabilities offered by integration of subsystems; it provides high flexibility in installation adaptation and expansion, and also eliminates the need to shut off the whole system in case of breakdown of a part of it - the fault of one component will not influence the operation of others.

How is the KNX/EIB system integrated with the audio/video equipment?

The KNX/EIB system can be integrated with the home audio/video units by installing an infra-red (IR) module communicating with these devices by infra-red waves. This means that i. e. the entrance of a person into the house will not only cause lamps to be switched on, blinds to be rolled down and temperature to be raised, but will also switch on the TV to the favourite channel or play a favourite CD from the player. Such functionality brings us ever closer to the capabilities of Bill Gates' house, where, when entering a room, one can see their favourite painting on the plasma screen hanging on the wall. The IR module can also reduce the volume of the TV when the telephone rings or start recording via a DVD or tape recorder the image shown by a camera in the corridor if an intruder is detected, or record a chosen film/TV show upon receiving a signal from our office. Examples abound. Imagination will suggest the best uses.

What are the differences between the Instabus EIB and the Powernet systems?

The Instabus EIB system is foreseen for new homes or homes undergoing reconstruction, because in order to install it one needs a new or completely modified electric installation. The appliances communicate over a special bus cable running around the whole house. The system offers great capabilities of expansion. A basic installation can easily be enhanced by further functionality and features, i. e. computer control. In turn, the Powernet system is recommended for interiors already finished; its components communicate via the power supply grid, so no additional cabling is necessary. Expansion of the system entails plugging another module into the electric outlet. The system can be expanded at any time (or i. e. integrated with the Instabus EIB system).

What is the ETS?

ETS (precisely, ETS stands for EIB Tool Software) is a set of tools for designing and starting up EIB installation via a Windows-based PC. From the formal point of view, starting up a bus system entails the sending of the right telegrams programming the EEPROM modules in the bus components. It s not important where in the building the equipment is located. Important is the definition of each component through the assigning of physical addresses (describing the location in the network structure - zone number, line number, component number in the line), group addresses (to describe the functions to be executed by a particular component of the network), and the supply of specific parameters necessary for the proper operation of the devices and cooperation with the bus itself. Creating the design essentially covers the connection of several individual devices into one functional whole connected by group addresses.

© The copying of text and photographs is forbidden and will be prosecuted.